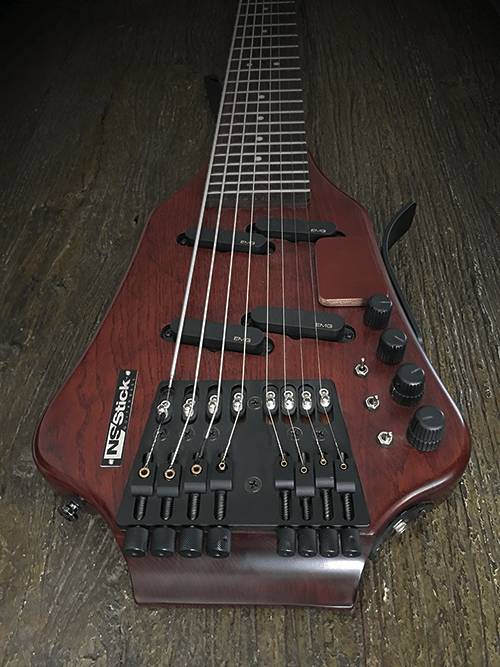 Being involved from a pretty early point in the evolution of all of this tap system stuff has been quite an interesting journey. For me, the feeling of the original 10 string (now called the Classic Chapman Stick) has always felt extremely fast and percussive. The 5ths turning in the left-hand also has made for some interesting interactions.

The NS Stick has a similar feeling but because the strings are thicker the feeling of response is a little different. It does feel more like playing a bass guitar/guitar. But the response on the fretboard is much faster because the tension on the strings is less than the tension on a conventional standard electric bass guitar. For example, if you do a little bit of the slap popping bass style that is usually applied to the bass guitar, it doesn’t take nearly the amount of hand pressure on the fretboard of the NS Stick.

Once a player gets used to the lighter response the feeling becomes very fast.

There are also myriad choices concerning the tuning. Any of the guitar tunings that already exist can be applied to the NS Stick, which right from the beginning opens up a world of creativity and possibilities a player can do and many have not been explored yet. Lots of open territory for people to get creative with and discover new sounds.

But the two most popular tunings seem to be either turning it in straight 4ths or more conventionally like a standard tuning of a guitar with the interval of the third between the third and second string. For me, that was a very interesting choice because of the things I’ve been doing with my right hand on the Classic Stick.

If I tune it in straight 4ths, which can be thought as a six string bass with two additional strings thinking that way I’m able to immediately apply the right-hand patterns I know on the Classic Stick to the NS Stick.

However, if I tune it more conventionally, like a guitar, with the interval between the third second string being the interval of a major third, then all the guitar patterns I already know can be applied. Doing the guitar string arrangement of a 6-string guitar tuned down a fifth (or baritone guitar tuning), with two lower strings.

I choose to use this more conventional guitar tuning and apply it to the NS Stick, which for me is a no-brainer because I have so many reflexes and patterns that I have already worked out on a regular guitar and playing bass chord style a’la Tuck Andreas style. I also love the flexibility of being able to go back-and-forth between the Classic Stick and the NS Stick with tunings being different but still having all of my tap reflexes applicable to the two very different turning approaches. That really opens up the creative possibilities. The same tapping reflexes I learn on either instrument sounds different on the other.

Of course, I can change that tunings of the strings anytime to fit my mood.